As part of the 2021 Photography Month, the gallery is pleased to present Spiritus, the first solo exhibition the artist Georges Poncet, which is being held from November 13, 2021, to February 26, 2022.

After completing his studies in the fine arts, Georges Poncet chose to focus exclusively on photography, and since the early 1980s has specialized in photographing works of art. For the past 25 years, he has been taking sophisticated pictures of exceptional works from the Louvre museum collection, in particular from the department of Egyptian antiquities. In his work for the Louvre, Poncet has also traveled through history and into the heart of diverse civilizations to evoke such extraordinary moments as the discovery of Coptic art of early Christianity, or the commission to document the tomb of Sennedjem in Luxor. Over time, his unique approach to photography has also been enriched by his exchanges, at times almost daily, with such contemporary artists as Pierre Soulages, Anselm Kiefer and countless others.

“In Soulages’ studio,” he says, “we talk about black with nervousness or tranquility, we look at tenderly at a particular grey, the canvas progresses, the photograph is taken.” He also explains, “Experiencing one of Kiefer’s artworks is an act that is both physical and intellectual. One needs time to discover the breadth of Anselm’s limitless inspiration, which brings together intimacy and history, frightening or secretive. With each of these artists, our gazes come together, become more refined, emotion emerges, and the essential happens: fidelity to the artwork is made present in the photograph.”

After a trip to Japan, George Poncet came back to Paris, moved by the Tokyo lights and with an awareness of the inevitability of sensuality in an image’s matter. The boundary between visible and invisible was blurred, and what lies beyond the focal plane became central to his work, something more than the dependence on reality that is integral to photography. His return to the Louvre placed him utterly in the present, deeply aware of the sensation and energy inside the artworks and the artists who created them. He allowed himself to be invaded by the pictorial space by giving it body, form and color… and the photographic gaze became his paintbrush, his material, fluid.

These revealing paths became the starting point for a first series of photographs entitled “Sfumato,” which led in turn to the series on display at the gallery, “Spiritus” – the breath of life, the soul.

In the Catholic tradition, statues in churches are veiled on Good Friday; images of the divine are forbidden on the day of that Christ was killed, inviting the gaze to turn inward. The absence of the representation of the divine, hidden beneath a veil, reveals the invisible, a presence, “theophany.” Underneath the veils, bodies and flesh are suggested with a discreet sensuality, unrelated to the carnal, that heightens the senses and makes it possible for spirituality to emerge.

With this spirituality of the senses, the photographer has also found himself in the places depicted in legendary paintings: Cézanne’s Bibemus Quarries, Courbet’s rivers near Ornans, Van Gogh’s roads in Auvers-sur-Oise, the Normandy coastline. The Spiritus series embraces the essence of these famous locations by connecting us not only to their history and to time, but also to our own perception and to the authenticity of the moment. In Georges Poncet’s work, photography conjures up both the complex memory of these illustrious places from historic paintings and the foundational sites themselves, captured in a perfect moment, in a perfect light, with a sense of immediacy and presence. The camera becomes more than a documentary tool, welcoming us into a visual dimension, into the substance of reality, as if we, too, were painters or sculptors. From behind the lens, Georges Poncet captures the history of painting and its sites in a way that is all at once utterly faithful to the artists, to these places and to himself—from the sensuality of the models and the painter’s gesture to the feeling of the air or light vibrating in Van Gogh’s wheat fields, the marks shaping the mountain immortalized by Cézanne or the luminosity of Courbet’s streams and grottos. The precise quality of light is fundamental, and the specific richness of a particular color is essential to the overall composition, to nourish the fragile consciousness of being present in the world.

In his search for a perspective that is reborn, Georges Poncet invites us, through his works, to discover the common universality, transitory and eternal, that lies within, that makes us evolve, that invites us to see both the places and paths of the history of art – as well as the immanence of creation in presence, and the sacred traces of the living, along a shared path where the observer and what is observed are in complete harmony. 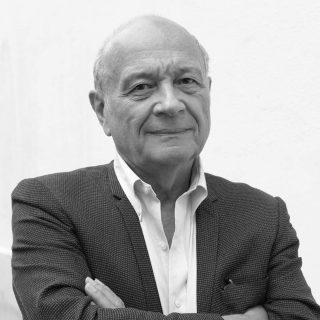